This weekend my course work got put on hold by a rather unexpected journey through eight different countries within just four days. A week ago a good friend of mine asked if my girlfriend and I would accompany him as he drove his van to Budapest to help some in-laws move home. It seemed like a nice little adventure so we agreed and set off during the early hours of Friday morning on a round trip of over two and a half thousand miles. 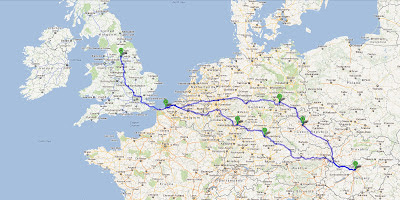 We went via the A1 to the south coast to catch a ferry from Dover to Dunkirk, then headed east through Belgium into Germany where we stopped for food in Frankfurt and then again in Nuremberg where we got a hotel for the night. The following morning we headed south-east into Austria then Hungary, finally arriving in Budapest on Saturday evening.

We set off a little late on Sunday as loading up the van took a lot longer than we'd anticipated, although we still somehow managed to squeeze in a little sight-seeing before leaving the city. As we wanted to make the trip a little more interesting we decided to take a bit of a detour and head through Slovakia into the Czech Republic so that we could have a meal in Prague on the way.

The relaxed approach backfired on us however as by the time we left Prague it was pretty late and we still had a long way to go. A combination of closed roads and a lack of diversion signs in Germany meant that we wasted a lot of time making little progress so we decided to call it a night and managed to find a place to stay in Leipzig (which seemed like a German version of Milton Keynes). This meant us getting up at the crack of dawn on Monday as we had a ferry to catch and were still about eight hours drive from Dunkirk.

The drive west was an endurance test. This was made worse by the fact that somewhere around either the Netherlands or Belgium an entire network of roads had sprung up since the sat-nav had last been updated, resulting in a wrong turn being made and the best part of an hour wasted. We got to the docks in Dunkirk in time to see our ferry depart and had to wait it out a few hours for the next one. On the plus side though we didn't have to empty the entire contents of the van for border control. The final stretch up to Leeds seemed like an eternity but we finally made it back and still had time for a pub meal on the way.
Posted by Unknown at 11:33 am
Email ThisBlogThis!Share to TwitterShare to FacebookShare to Pinterest
Labels: Travel
Newer Post Older Post Home